Backyard Games For Kids, the perfect way to get your kids playing outdoors with
No resistance. No more saying “I’m bored”

Give your kids hours of outdoor fun, watch their little faces light-up, hear them giggle and laugh with sheer delight as they play games in their backyard.

Sardines, flags, and Frisbee’s. What do these have in common? They’re all backyard games for kids for fun outside

We’ve compiled a list of backyard games for kids for both large and small groups, as well as for instructions on how to play them.

You may even recognize some from your own childhood. Read on and let the memories come flooding back.

Consider what hide and seek would be like when you stuff a bunch of kids into one hiding spot?

That’s the premise of sardines, which is an old summer camp game.

You need a relatively large group of people to play it, we’ll say at least eight people, but up to twenty can play.

The goal is to find other people’s hiding spots, then squeeze in beside them and not be found.

Here are some step by step instructions.

You can play this game in the backyard, front yard, in the house, or any combination. But, the people playing need to know what’s in-limits and what’s out.

You could draw a map, or you could set boundaries like “Inside the house and in the backyard, but not past the driveway” This makes sure that people can find other people, and no one wanders too far (especially smaller kids).

Step 2: Turn Out the Lights or Wait Till Night

This game is a lot more fun at night, or at least at twilight, but you can play it during the day if you prefer. The darkness gives you more hiding spots and makes the game feel more exciting.

If you’re worried about the safety of playing in the dark, everyone can have a flashlight. You’ll just have to remember to turn the flashlight off when you find someone and hunker down with them.

Step 3: Make Teams or Choose the “It”

In this game, you can have teams, or the whole group can play as one.

If you’re playing as teams, then you’ll have two people who are “it”. However, you decide who’s “it” they’re going to be the one who hides first.

The rest of the people will turn around and wait two or three minutes or so, to give the person time to hide.

Once they’re hidden, the rest of the team sets out to find them.

Step 4: Finding the Hiding Spot When You’re “It”:

If you’re “it” you can’t just hide in a closet with no space for anyone else.

You have to pick a spot that’s big enough to hide everyone you’re playing with or everyone on your team.

That’s why some games choose to have multiple “its” since there may not be enough hiding spots to fit 10+ people.

You’re allowed to move hiding spots whenever you like, but your goal is not to be found – so make sure you only change when no one’s around.

Now that the person is hidden, the other kids must find them.

When you find someone hiding, ask them “are you the sardine?” If they are, they have to say yes.

If they aren’t, then you can leave them alone, and wonder why they’re hiding and not looking for the person who’s “it”.

When the person says yes, you have to hide with them.

Things get a little cozy, so be prepared to feel somewhat squished.

Capture the Flag is another game that started in summer camps, and a favorite outdoor activity or party game for kids.

The idea here is to capture the flag of the opposite team and bring it back to your base without being tagged or captured.

There’s some tackling in this game (or tagging, if you want to play gently) and even a “jail”.

You’ll need quite a few people for this game as well, like in the 10-20 (or more) range. You’ll also need bandannas or t-shirt colors for each team and two flags.

Here’s how to play.

Step 1: Map Out the Boundaries And Team Zones.

Like sardines, you need to map out where the game boundaries are. You’ll also need to divide the territory into two zones, equal in size. Make sure the division between the two team zones is something obvious (like a driveway or a part of the garden).

Once you’ve decided on the map, give a copy to each of the two teams. They’ll need to decide who their team captains are.

The team captains on each team will decide where to hide the flag. The flag can be a real flag, a piece of cloth, or an object which needs to stay in the decided place within their zone.

It must be partly visible so the opposite team can find it, once hidden it must not be moved.

To make it more difficult for the other team to capture it, you can hide it near the back of your zone area.

That way the other team will have to come right into your area to grab the flag and risk getting caught.

Step 2: Set Up Jail and Guards

Part of each team should be set up around the flag, to guard it against any people trying to steal it. You’ll also need a “jail” area and guards in both zones, to make sure nobody escapes, one guard for each jail.

If there aren’t enough jail guards, people can “jailbreak” and run back to their teams.

The rest of the team who aren’t guarding the flag or jail, are on the hunt to try and steal the other team’s flag.

Once everyone knows their roles. . .

The object of the game is to find the other team’s flag before they find yours. You have to physically capture their flag, and bring it back to your territory.

If someone sees a person from another team over the line, then they can “tag” them and take them to jail.

If too many people are in jail and there’s no one left to play, the prisoners can do a “jailbreak” and run for their lives back to their side.

The game continues until one flag is successfully captured, without the person being caught and having to put the flag back.

It’s a great game for large crowds like birthday parties or family reunions. 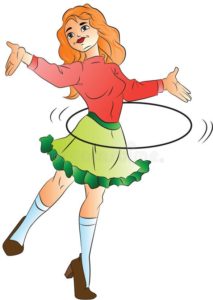 Let’s say that you don’t have 10-20 people to play one of those two games, but you still need something to do. All you need for this game is willing participants and hula hoops.

Check out this page for the different hoola hoops

You can set the rules in different ways, like whoever hoops the longest without dropping it wins – or that the hoop can never hit the floor.

You can go on to do arm hooping, neck hooping, leg hooping – it’s all a bunch of laughs. Treat the timing like musical chairs, and see who’s left when the song is done.

If there’s more than one person, you can do a playoff-type round.

It’s fun, pretty much free except for the hoops, and good for all ages. You don’t even have to give out prizes if you don’t want to, or the prize could be something non-monetary like that person gets to get dessert first. 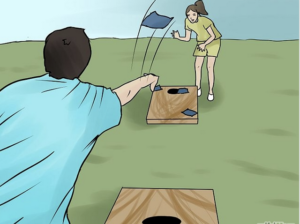 If you want a game that improves your kids’ hand-eye coordination while being fun, corn-hole is for you.

To play you’ll need two corn-hole boards and some small bean bags. (comes as a set available under $50)

At first, you’ll set the board up about ten feet away from each other. Each team gets an equal number of bean bags.

When everything is set up, both teams (two people on each team) stand behind their board. The goal is to toss their beanbag into the hole on the other board.

You may only throw underhand and your arm cannot go over the start of your board.

You score a point if the bag lands on the board, but you score three points if it goes in the hole. For a harder version, only count points (1 each) for an in-hole toss.

Whoever gets to a certain number first (it’s up to you) wins. If you want to keep playing, then you each move your board back a few feet.

Or let someone else have a turn. 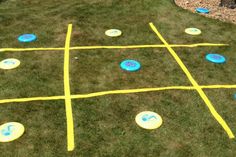 This is a game for older kids, as it takes a lot of coordination. All you’ll need for it are nine Frisbee’s (you can get them at the dollar store) and some duct tape or ropes.

Set up the ropes or duct tape in a big grid pattern, like you would if you played tic tac toe on the paper.

Give each person (up to three players at one time) four/three Frisbee’s.

Check out this page for the latest frisbee’s

Their goal is to get three in a row, but they can only throw the Frisbee’s to land them in the spots. If they don’t get the frisbee in, they can go retrieve it from the “board”.

Once someone successfully throws three Frisbee’s in a row, they’ve won and you can start over.

If none of these catch your kids’ attention, you can always have them make up their own games. Ask them to come up with their own version of freeze tag or come up with an idea for a competition.

Whether you end up playing one of these backyard games for kids or making up your own, it’ll be a night to remember.

Even if the evenings are still a little chilly out?

You can learn how to heat your backyard and make it more comfortable for you and your family.

I’m sure your little ones will be having so much fun they won’t want to come inside.

The best bonus of all is:
You can feel happy in the knowledge that your kids are getting the fresh air they deserve, as well as building strong bones and muscles as they run about playing games and having fun.