One of the most common components of a master barbecue is knowing how to smoke a brisket. It is often one of the most undercooked cuts of beef. The fact is that there is no such thing as a one-size-fits-all master brisket recipe. It’s just not feasible.

There are so many variables, from the meat to the wood to the smoker to the seasoning, that distilling everything into a few basic universal standards is difficult.

Although there is no simple answer to how to smoke a brisket, don’t worry; there are a few key rules to remember that will make smoking a brisket much simpler for you. In this step by step guide we are going to help you conquer one of the most challenging types of beef to smoke.

First, we will look to understand;

Brisket is a beef cut made from the lower breast and pectoral muscles of a cow. Because this area has been overworked, it generates a tough, connective-tissue-rich portion of meat. As a result, it’s best cooked using the low-and-slow approach.

Brisket is a massive cut of beef that may weigh anywhere from 10 to 14 pounds for a complete brisket (also known as a ” brisket packer”). The “flat,” known as the “first cut,” is the thinner part of the brisket, while the “point,” is called “deckle point” or “second cut,” this is the thicker and fatter part.

Raw brisket can be stored in the refrigerator for up to a week in its original packing, or frozen for up to a year in airtight packaging. After cooking, brisket will keep in the fridge for three to four days.

A “packer cut” brisket is a massive two-muscle cut that weighs at least 11 pounds before trimming and has an intact fat cap.

The second major cut is usually a lean flat-only cut that is ideal for pot roast.

Wagyu or Prime briskets are highly sought after since they are the fattest of all.

How to Smoke a Brisket?

One hour before preparing the grill,

Step1  Place the brisket on a rimmed baking sheet. In a shallow dish, season the beef all over with salt and pepper, until it feels like sand sticking to damp skin. Allow the meat to come to room temperature for 1 hour.

Step2  After igniting a full chimney of charcoal and letting it burn until flames emerge from the top, pour the coals onto one side of the grill.

Step4 Put three wood slabs around the edge of the fire (not on top of it). The goal is for the wood to catch and softly smolder. If you set them on top of the coals, they will burn too quickly.

Step5 To smoke the brisket over indirect heat, (the side without embers) close the grill and vent.

Step6 The grill’s lid vent should be placed as far away from the heat source as possible. This helps to drag the smoke up and over the meat as it rises.

Step7 In the top vent, place a thermometer. Heat until the thermometer registers 225 to 250°F, then adjust the vents on the bottom and top of the grill as needed to maintain a steady temperature.

Step8 Continue to smoke the brisket for another 10 to 12 hours, rotating every 3 hours and turning if one side is browning quicker than the other, or until the brisket is extremely tender but not falling apart and an instant-read thermometer put into the thickest portion of the meat reads 195 to 205°F.

This is, in my opinion, the most critical part. If you can’t control your fire and temperature, you’ll never have a nice brisket cook.

Smoking on a ceramic egg, electric smoker, pellet cooker, or any other equipment with a motorized thermostat is significantly easier since the heat control is quite simple and consistent.

Avoiding temperature extremes is key to keeping your fire under control, anything more than or less than 20 degrees Fahrenheit. Indeed, the old proverb “if you’re looking, you ain’t cooking” pertains to temperature control; opening your smoker too frequently would result in heat loss, of course.

Managing your temperature, demands a detailed understanding of your cooker, such as recognizing hot spots and calculating the “sweet spot” for meat placement.

How Long Does it Take to Smoke a Brisket?

If you ever ask me “how long do you cook a brisket for?” expect the response “until it’s done.”

The reason being there are several factors that impact the overall time it takes to smoke a brisket, even the weather plays a part.

These are only a few of the things that impact the chef’s time, which is why you shouldn’t be concerned about using a timer when cooking.

When it comes to brisket, an even temperature, which is generally so steady for things like grilling steak, isn’t always going to be predictable, so use it as a guideline rather than a rule.

A probe test (sticking a knife or probe into the brisket and getting no resistance) can detect if it should be cooked at temperatures ranging from 195 to 215 degrees. The lower the temperature you smoke at, the lower the internal temperature of the finished brisket (and vice versa).

Allowing the meat to rest

Brisket, like any other cut of beef, requires resting after cooking. The muscle fibers relax and moisture is preserved when the brisket is removed from the smoker and covered in pink butcher paper or foil to rest.

Most people place their briskets in a cooler or Cambro after they’ve been cooked, but this isn’t actually resting, but rather ‘holding’ because of the insulation. This has a unique effect on the finished product, since the brisket cooks more slowly with its own residual heat, resulting in more tender meat.

Whether you give the brisket a proper rest or finish it by holding it depends on your own preference for how each process affects the brisket. To put it another way, try them all out to see which one best suits your needs.

After the cooking procedure is over, the brisket must be left to rest for at least an hour, regardless of the method used.

And there you have it. You now know the procedure and have the knowledge about how to smoke brisket so, go ahead and impress all of your guests.

Video: Watch to See How to Smoke a Brisket 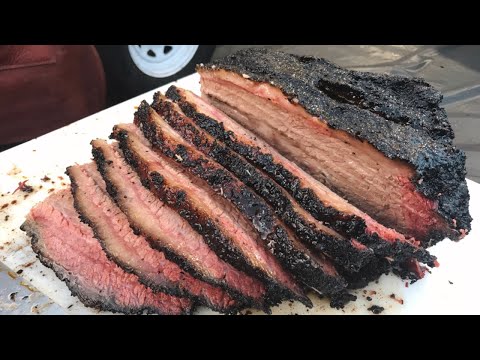 Related Articles:
How to Trim a Brisket
What Temp is Brisket Done?
What Part of The Cow is Brisket